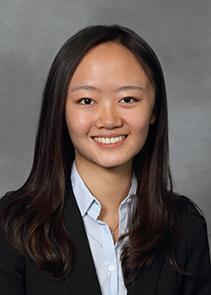 Xiaoyun Wang graduated from Tsinghua University with a B.S. in mathematics & physics and a B.S. in economics in 2013.

During the 2012-2013 school year, Xiaoyun did a nine-month internship as an analyst in CB&S division (global investment banking) in the Hong Kong branch of Deutsche Bank, in which she got familiar with the market and developed her professional skills. She participated mainly in an acquisition deal, a syndicate loan deal and two IPO deals. Besides the live deals, her job also included pitch book building, and company and field researches.

During her internship in CITIC Securities in the summer of 2011, she gained exposure to the daily work of all teams in research division and a Black-Litterman model building/testing project. Xiaoyun also has a strong academic background, including an Outstanding Award in a worldwide mathematical modeling contest, a SIAM Award, and two published papers in mathematical modeling and system safety and reliability modeling respectively.

With her financial engineering degree, Xiaoyun wants to further develop her technical skills and her understanding of the market. Xiaoyun intends to pursue a career in trading or asset management, while she is also open to other possibilities.