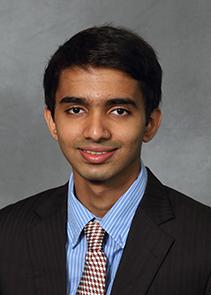 Atik Shah received his bachelor’s degree from Cornell University with a double major in mathematics and economics. Before enrolling in the Master’s of Financial Engineering program, Atik interned over the summer of 2013 at Motilal Oswal Securities Limited in Mumbai, India on their institutional equities trading desk, where he authored a trading manual covering sales and execution procedure for both cash and derivatives desks. The manual is now being used to educate new traders on firm protocol.

At Cornell, Atik was a project manager with Cornell Venture Capital, where he led teams of student analysts on strategy, industry analysis and due diligence projects with venture capital firms. Prior to graduation, Atik had two summer internships in Mumbai, with Morgan Stanley Private Wealth Management and the Royal Bank of Scotland’s Private Bank. During the summer of 2012, he worked as an intern on a research project in political finance with Columbia Business School.

With his financial engineering degree, Atik wishes to build a profound knowledge base in finance, hone his quantitative skills and boost his programming abilities, to better position himself for a career in finance.

Outside of work, Atik enjoys guitar, snooker, cricket and chess.