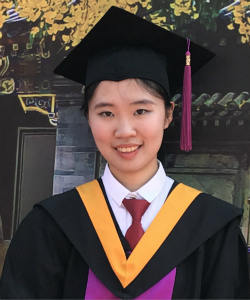 A paper co-authored by ORIE first-year doctoral student Qian Xie, titled “Stabilizing Queuing Networks with Model Data-Independent Control,” has been published in the January 25 issue of IEEE Transactions on Control of Network Systems.

Qian, who received her master’s degree in 2021 from New York University’s Tandon School of Engineering, co-wrote the article with Professor Li Jin of the UM Joint Institute and the Department of Automation at Shanghai Jiao Tong University.

“Classical queuing network control strategies typically rely on accurate knowledge of model data, i.e., arrival and service rates,” the paper states. “However, such data are not always available and may be time-variant. To address this challenge, we consider a class of model data-independent (MDI) control policies that only rely on traffic state observation and network topology.

“Specifically, we focus on the MDI control policies that can stabilize multi-class Markovian queuing networks under centralized and decentralized policies. Control actions include routing, sequencing, and holding,” the authors write. “By expanding the routes and constructing piecewise-linear test functions, we derive an easy-to-use criterion to check the stability of a multi-class network under a given MDI policy. For stabilizable multi-class networks, we show that a centralized, stabilizing MDI policy exists. For stabilizable single-class networks, we further show that a decentralized, stabilizing MDI policy exists. In addition, for both settings, we construct explicit policies that attain maximal throughput and present numerical examples to illustrate the results.”

The authors conclude: “We study the stability of open queuing networks under a class of model data-independent control policies. In addition, we derive an easy-to-use stability criterion based on route expansion of the network and explicit piecewise-linear test functions. With the stability criterion, we generalize the classical join-the-shortest-queue policy to ensure stability and attain maximum throughput under centralized/decentralized settings. Our analysis and design can also be applied to specific network control problems with stability issues.”