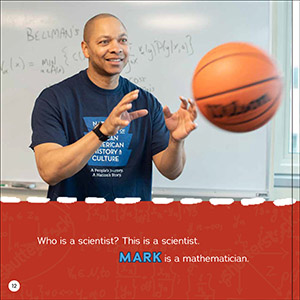 When Mark Lewis received an email from children’s book author Laura Gehl, asking him to participate in her latest project, he didn’t need much convincing. Now the Maxwell M. Upson Professor of Engineering and ORIE director is among 14 scientists featured to a target audience of three to 10-year-olds in Who Is a Scientist?, released October 5.

In the latest of Gehl’s nearly two dozen popular children’s books, colorful photographs show the diverse group of scientists—from Mark (all participants are identified by their first names) in operations research to Jagmeet in neuroscience, Isha in meteorology, and Joyce in entomology—at work and play. Readers learn that Lewis, for example, “studies how math can be used to make people’s lives better” and that “he also enjoys playing basketball and watching movies.” A separate paragraph aimed at older kids adds details about the field of OR and his research.

“I wanted kids to see that scientists can study all types of different things and that scientists and kids share a lot of the same passions—for dance and basketball and eating junk food and playing with their pets,” says Gehl, herself a neuroscientist and a mother of four. “It makes it easier for the kids to imagine that they can be scientists, too.” She was eager to include Lewis, she explains, “because I think mathematicians are often neglected when people talk about cool scientific careers.”

Aware of studies finding that most kids think of scientists as white men, Gehl was just as careful to offer as many children as possible a chance to recognize themselves in the individuals shown. The group includes Black, White, Asian American, Latinx, and Indigenous scientists; a scientist with full-sleeve tattoos; a scientist wearing lipstick; a scientist who uses forearm crutches; and a scientist who wears a headscarf. “There should be no ‘mold’ for a scientist; our diversity is our strength,” Lewis agrees. 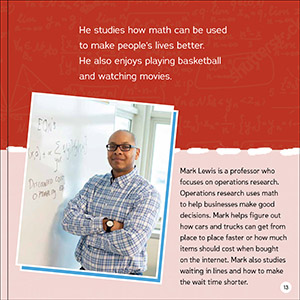 While Lewis had his father—an engineer—and other family members and their friends to look to as role models, he is well aware of the lack of diverse representation in scientific careers. From kindergarten through his Ph.D., he had only one Black teacher, a math professor in college who introduced him to OR.  “Outside of my study of queues, I spend a lot of time and energy thinking of how to change this and to help provide opportunities for students and faculty from underrepresented groups,” says Lewis. “Knowing the goal of Laura’s project is in line with what I am passionate about made it all the more gratifying to take part.” Plus, he adds, “it was a lot of fun.”

Mark Lewis, the Maxwell M. Upson Professor, has been reappointed as director of the School of Operations Research and Information Engineering. His reappointment is for a two-year period from July 1, 2022, to June 30, 2024. Read more about Mark Lewis reappointed ORIE director