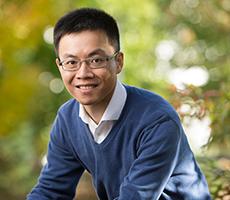 Yudong Chen joined the faculty at Cornell in August 2015 as an Assistant Professor in the School of Operations Research and Information Engineering. He received his Ph.D. from the Department of Electrical and Computer Engineering at the University of Texas at Austin in 2013, and his Bachelor and Master degrees from Tsinghua University in 2008. Before coming to Cornell, he was a Postdoctoral Scholar at the Department of Electrical Engineering and Computer Sciences in University of California, Berkeley. His research interests include machine learning, statistical inference, optimization and networks.

Professor Chen's primary research focus is in to developing theory and algorithms for efficient analysis of large-scale data sets and networks, and to understand the fundamental limits imposed by the characteristics of the problem. He is interested in developing and analyzing statistical and machine learning algorithms that are both computationally efficient and robust to noise. He has worked on problems in high-dimensional statistics, sparse and low-rank estimation, community detection and clustering in networks, as well as applications in communication and transportation networks.